With Oil, Water and Iran as Targets, US on Brink of Recognizing Israeli Sovereignty Over Golan Heights 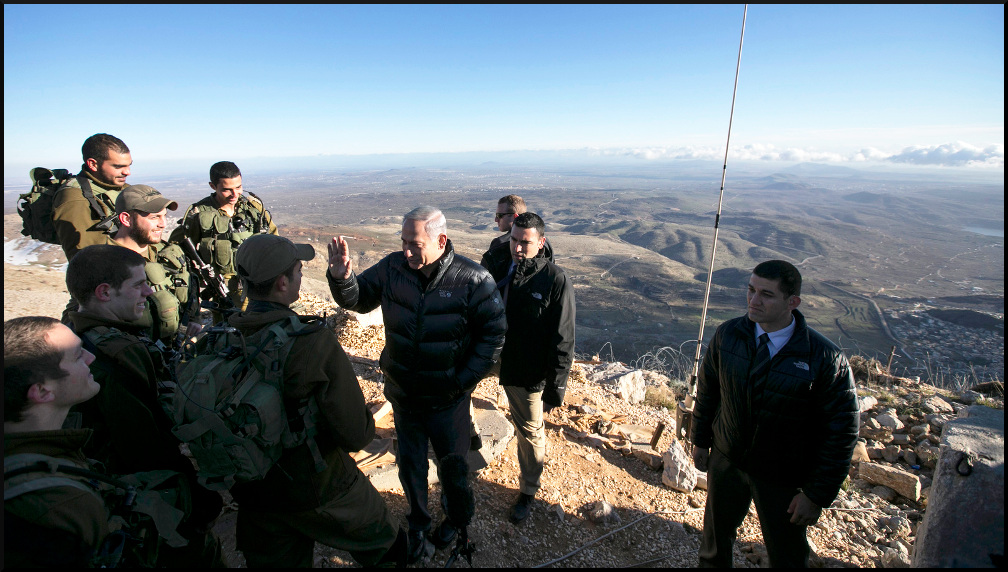 WASHINGTON — A new bill recently introduced in the Senate, along with its companion bill in the House, would result in the United States government recognizing Israel’s sovereignty over Syria’s Golan Heights, which has been occupied by Israel since 1967. The territory was later annexed in 1981, but the international community — including the United States — has not recognized Israel’s claim to the Syrian territory.

In addition, the bill would also promote the U.S. conducting “joint projects” with Israel in the Golan, including “industrial research and development.” This is sure to result in joint U.S.-Israeli efforts to extract the large oil reserves recently discovered in the Golan Heights, as the rights to extract that oil were granted to the joint U.S.-Israeli venture Genie Energy soon after its discovery was made public.

The move to introduce legislation regarding the contested territory has been hinted at for months by top Israeli officials, especially following the decision of the Trump administration to unilaterally recognize the city of Jerusalem as belonging exclusively to Israel and as being that country’s capital.

Last May, Israeli Intelligence Minister Israel Katz told Reuters that Washington’s endorsement of Israel’s control of the Golan Heights was now “topping the agenda” in bilateral diplomatic talks between the two countries, and that such a move would likely come within a matter of months, though it apparently took longer than Katz had originally anticipated.

Katz also had stated that U.S. recognition of the Golan was being peddled to the Trump administration as a way to further counter Iran, the goal that has now become the guiding force behind President Donald Trump’s Middle East policy. In addition, Katz had stated that bilateral discussions regarding U.S. recognition of the Golan had vastly expanded to involve various levels of the U.S. administration as well as several Congressmen.

The effort to which Katz alluded last year appears to have paid off in the form of the recently introduced bills in both the House and the Senate. The Senate bill was introduced by Sen. Ted Cruz (R-TX), who is the top Republican recipient of pro-Israel lobby contributions in the U.S. Senate, and Sen. Tom Cotton (R-AR), who is also heavily funded by the pro-Israel lobby. Indeed, Cotton received over $700,000 from the Emergency Committee for Israel in 2014 and nearly $1 million from that same group a year later.

Today @SenTomCotton, @RepGallagher & I today introduced companion bills establishing that it shall be the policy of the United States to recognize Israel’s sovereignty over the Golan Heights. –> https://t.co/G5sHtAecZQ

Just as Katz had stated, the new bill frames U.S. recognition of the Golan as a means of countering Iran, stating directly that the U.S. must recognize Israeli sovereignty over the area “in light of new realities on the ground, including Iran’s presence in Syria.” It also notably states that it is in the “national security interest” of the United States that Israel consolidate its control over the territory, and further states that the push to recognize the Golan Heights as belonging to Israel is a “diplomatic and geopolitical” consequence of the Syrian government’s alleged use of “weapons of mass destruction,” alleged “ethnic cleansing of Arab Sunnis,” and its killing of civilians.

The US has been committed for over 40 years to ensuring Israel’s security from attacks emanating from across the Golan Heights. The threat Iran poses to America and Israel requires acknowledging the reality of Israel’s control over the territory as a matter of national security. https://t.co/AKthQjPoX4

This basis for punishing Syria by weakening its claim to the Golan is dubious at best. Indeed, the Syrian government’s alleged use of “weapons of mass destruction,” apparently a reference to chemical weapons, is a contested matter given the fact that many, if not all, of those alleged chemical weapons attacks were either staged or involved chemical weapons instead used by rebel groups backed by the United States and its regional allies, including Israel. The United States has also repeatedly and illegally used a chemical weapon, white phosphorus, in its military operations in Syria.

In addition, the bill fails to note that the U.S. has killed scores of Syrian civilians in its military operations in Syria — including in Raqqa, where civilian bodies are still being uncovered nearly two years after the U.S.-led “liberation” of that city. Apparently, only the Syrian government’s civilian death toll has “diplomatic and geopolitical consequences.”

Furthermore, the latter point of Syria’s alleged ethnic cleansing of “Arab Sunnis” is sharply ironic given Israel’s ethnic cleansing of Palestine, most of whose inhabitants are also “Arab Sunnis,” as well as the fact that U.S.-backed rebel groups ethnically cleansed large parts of Syria from religious minority groups such as Christians and Yazidis.

Thus, the justification for giving the Golan to Israel as a means of punishing Syria is just window dressing for the Israeli government push to consolidate its control over the territory with the help of its allies in the U.S. government. Despite that, the bill has a good chance of passing the Senate, given that chamber’s recent and overwhelming bipartisan approval of the so-called “anti-BDS” bill that had been pushed by the pro-Israel lobby as a means of countering nonviolent efforts to protest Israel’s inhumane occupation of Palestine.

Cover for the oil

Despite Israel’s eagerness to consolidate control over the territory, any U.S. recognition of Israeli sovereignty over the Golan would likely generate backlash from the majority of the international community and would likely heighten tensions between Israel and Syria. This is largely because international law still refuses to recognize the area as part of Israel, even though Israel has sent over 20,000 Jewish settlers to live there in order to permanently change the area’s ethnic-demographic composition, turning the native Druze population into a minority.

Many of the Druze living in the occupied Golan have long complained of being routinely discriminated against under Israeli rule, and continue to support the Syrian government. In addition, the UN has accused Israel of “forcing citizenship” onto the group in a bid to increase its claim to sovereignty over the region. Israel hopes to add an additional 100,000 Jewish settlers to the area by 2020 in order to strengthen this claim. 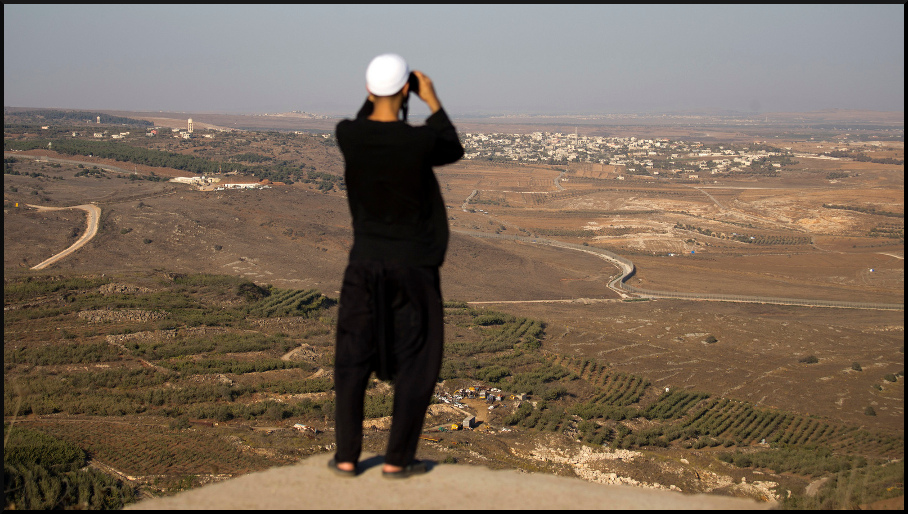 A Druze man watches the fightings between forces loyal to Syrian President Bashar Assad and rebels in the village of Jubata al-Khashab as seen from the Israeli-controlled Golan Heights, Sunday, Sept. 11, 2016. (AP Photo/Ariel Schalit)

While any such measure is unlikely to gain much traction internationally, it is important to note that the goal of a U.S. measure to recognize Israeli sovereignty over the Golan is not to secure international support but to provide enough diplomatic cover for the joint U.S.-Israeli extraction and use of the area’s strategic resources, namely oil. Indeed, in 2015, a massive oil reserve was discovered in the Golan Heights and is estimated to contain “billions of barrels” of crude oil that could turn Israel – which currently imports the vast majority of its fuel – into a net oil exporter.

MintPress has previously reported that Genie Energy’s investments in the Golan are likely the strongest factor guiding the U.S. towards the recognition of Israeli sovereignty over the occupied territory. Indeed, without a U.S. move recognizing Israel’s control over the region, Genie’s Israeli subsidiary is unable to sell any oil it extracts from the occupied territory on the international oil market.

This argument is strongly supported by the text of the current bill, which specifically calls for joint U.S.-Israeli projects in the Golan that include projects in “basic and applied scientific fields” and “industrial research and development.”

Oil and water do mix

In addition to oil, the Golan Heights contains important freshwater resources, as it is one of three sources of freshwater available to the Israeli state. It is the largest in size and most abundant, as it includes the mountain streams that feed Lake Kinneret (the Sea of Galilee) and the headwaters of the Jordan River. As MintPress has noted in the past, the water resources of the Golan Heights are essential not only to Israel’s existence but also to its expansionist ambitions, a fact that explains Israel’s role in creating a plan in 2006 to engineer a “civil war” in Syria. Yet, the discovery of oil and creation of Genie Energy have dramatically strengthened Israel’s resolve, as well as the resolve of powerful figures in the U.S. and the U.K., to consolidate control over the Golan.

However, the current text of this new bill suggests that the use of this water will also come into play in the joint U.S.-Israeli project it calls for in “strategic and applied research of agricultural problems.”

Originally, Israel had planned to use a “buffer zone” of extremist militants it was funding in southern Syria in order to push for international recognition of the Golan, particularly in the event that the Syrian conflict resulted in regime change in Damascus. However, as South Front noted late last year, the Syrian military’s defeat of those groups has dealt “a huge blow to Tel Aviv’s plans to make the international community recognize the annexation of the Golan Heights” and led then-Israeli Defense Minister Avigdor Lieberman to worry that the Syrian military’s success could soon threaten Israel’s hold on the Syrian territory.

Thus, Israel is now pushing for the U.S. to recognize its sovereignty over the Golan for fear of losing it completely, even though such recognition could result in an all-out war between Israel and Syria, as well as with Syrian allies such as Iran and Lebanon’s Hezbollah. Given that Israel has been preparing for such a war for well over a year and that Israel has been given the authority to bring U.S. troops into that conflict if and when it occurs, the likely consequences of the passage of this bill should be treated with the gravity they deserve.

Whitney Webb is a staff writer for MintPress News and has contributed to several other independent, alternative outlets. Her work has appeared on sites such as Global Research, the Ron Paul Institute and 21st Century Wire among others. She also makes guest appearances to discuss politics on radio and television. She currently lives with her family in southern Chile.