With Oil, Water and Iran as Targets, US on Brink of Recognizing Israeli Sovereignty Over Golan Heights

by Whitney Webb, published on MintPress News, February 27, 2019 WASHINGTON — A new bill recently introduced in the Senate, along with its companion bill in the House, would result in the United States government recognizing Israel’s sovereignty over Syria’s Golan Heights, which has been occupied by Israel since 1967. The territory was later annexed in 1981, but the international […]

The Case Against the Zionist Left

by Yoav Litvin, published on CounterPunch, September 6, 2019 Zionist historical revisionism constructs an erroneous presentation of Israel as accommodating a left-to-right political milieu, the left-flank of which amenable to a peaceful resolution of “the conflict”, instead of recognizing the entirety of Zionism, including its “liberal” faction, as inherently white supremacist, settler colonialist and genocidal. The supposed left, “liberal” wing of […]

The Myth of the U.N. Creation of Israel 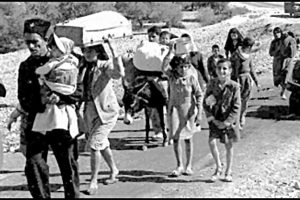 The popular belief that Israel was established by the United Nations is rooted in falsehood and prejudice against the rights of the Palestinians. By Jeremy R. Hammond Published on Foreign Policy Journal| Oct 26, 2010 There is a widely accepted belief that United Nations General Assembly Resolution 181 “created” Israel, based upon an understanding that this resolution partitioned Palestine or otherwise […]