What Kind of Jew Is Shlomo Sand?’ 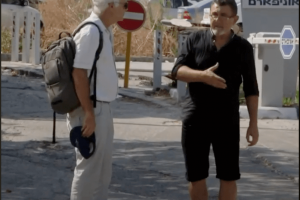 Documentary by Bruce Robbins, Posted on YouTube, by  Mondoweiss, April 28, 2020

Bruce Robbins, an English literature professor and political theorist at Columbia University, has long been active in the effort to bring democracy to Israel and Palestine. His latest effort is a documentary titled, “What Kind of Jew Is Shlomo Sand?” that he publishes today and that is embedded here.

Israeli Shlomo Sand wrote the book “The Invention of the Jewish People” wherein he refutes the claim that the Jews were expelled from their native lands by the Romans shortly after the time of Christ.   This would indicate that the Palestinians living in greater Palestine at the time European Jews decided to claim their lands were the natural descendants of the historic Jews in the region as well as the Philistines and other tribes living in the area a couple of millennia ago.  Over time they converted to Christianity and Islam….

Clearly this line of thinking undermines any and every Zionist claim of return to a ‘Promised Land’ along with much  of the history they use to support those claims.

You can read Phillip Weiss’s interview with Robbins about his interest in Shlomo Sand’s work on Mondoweiss, here.