Why Trump Can’t Save Israel 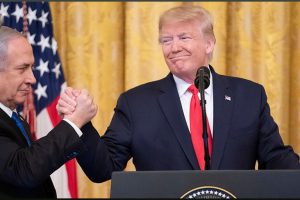 by Tim Anderson, Published on the American Herald Tribune, January 29, 2020 Despite Trump’s apparent show of strength in the cynical ‘Peace to Prosperity’ plan, he is actually helping Netanyahu destroy Israel, the European colony in Palestine. Palestinian envoy to Britain Husam Zomlot said the announcement was a “piece of political theatre” and will push the situation “over the cliff […]

END_OF_DOCUMENT_TOKEN_TO_BE_REPLACED
Leave a comment Donald Trump, The Deal of the Century