Netanyahu and Trump Must Learn the Lessons of Apartheid South Africa 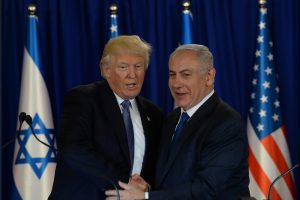 To South Africans, US President Donald Trump’s “deal of the century”, handed to Israeli Prime Minister Benjamin Netanyahu on a silver platter, looks like the clone of an apartheid state.

Hendrik Verwoerd, the former South African prime minister and architect of apartheid, stated as far back as 1961:

“The Jews took Israel from the Arabs after the Arabs had lived there for a thousand years. Israel, like South Africa, is an apartheid state.”

He was irked by the criticism of his country’s apartheid policies, in contrast to the West’s unconditional support for Zionist Israel.

To be sure, Verwoerd was correct. Both apartheid South Africa and Zionist Israel were settler-colonial states created on the basis of the dispossession of indigenous peoples.

This is unblushingly documented in Israel’s case, from the time of Theodor Herzl through to David Ben-Gurion, Menachem Begin, Ariel Sharon and Netanyahu. Both states preached and implemented a policy based on racism, giving exclusive citizenship to Jews in Israel and whites in South Africa, along with the monopolisation of legal rights on land ownership, property and business.

Add to that superior access to education, healthcare, and social, sporting and cultural amenities; a monopoly on security forces; and marriage laws designed to safeguard racial “purity” – and the result is an apartheid state.

The fact that the Palestinian minority within Israel is allowed to vote hardly redresses the injustices in all other aspects of society. In any case, those Palestinians allowed to stand for election to the Knesset do so on condition that they dare not question Israel’s existence as a Jewish state.

In apartheid South Africa, so-called “non-whites” were consigned to a Kafkaesque non-citizenship status, subject to all manner of discrimination, including laws prohibiting free movement, inhibiting access to work and trade, and dictating where they could reside.

Verwoerd would have been well aware of Israel’s dispossession of indigenous Palestinians in 1948 – the year his apartheid party similarly came to power – and of the accompanying massacres, ethic cleansing and destruction of their villages. His own regime cleansed cities and towns of so-called “black spots” – where the “non-whites” lived, socialised, studied and traded – by bulldozing homes, loading families onto military trucks, and forcibly relocating them to distant settlements.

While Verwoerd did not live to see the division of Palestinian territory after the 1967 Six-Day War, he would surely have admired the machinations of enclosing Palestinians in their own ghettoised prisons. This, after all, was the Verwoerdian grand plan, and the reason why former US President Jimmy Carter could so readily identify the occupied Palestinian territories as being akin to apartheid.

South Africa’s bantustans comprised 13 percent of South Africa, uncannily comparable to the territory Israel consigns to Palestinians. It is estimated that around a third of the occupied West Bank comprises illegal settlement blocs and Jewish-only roads, further reducing the 22 percent of pre-1967 West Bank territory left to the Palestinians.

When I visited former Palestinian leader Yasser Arafat in his bombed-out headquarters in Ramallah in 2004, he pointed around and said: “See, this is nothing but a bantustan.” I responded that no bantustan had been pulverised by tanks and aircraft.

Pretoria pumped in funds, constructed impressive administrative buildings, and even allowed for airlines to service the bantustans, to show the world they were serious about “separate development”. The bantustans were not even fenced-in, never mind enclosed by a monstrous apartheid wall.

What Verwoerd surely admired, too, was the impunity with which Israel exercised state violence and terrorism to get its way, without hindrance from its Western allies, primarily the US. What Verwoerd and his ilk came to admire in Israel, and sought to emulate in South Africa, was how Western powers permitted an imperialist Israel to use its unbridled military to hold back the rising tide of Arab nationalism in its neighbourhood.

But it was not only the racial doctrine of Israel that excited apartheid’s leaders – it was also the use of the biblical narrative as the ideological rationale for its vision, aims and methods.

The early Dutch colonisers, the Afrikaners, had used the Bible and the gun to carve out their exclusive bastion in South Africa. Like the biblical Israelites, they claimed to be “God’s chosen people”, with a mission to civilise the wilderness – disregarding the productivity of people who had tilled the soil and traded for centuries. It was only they who would make the land flow with milk and honey. They invoked a covenant with God to deliver their enemies into their hands, echoing Zionism’s claim about Palestine being “a land without a people”.

South Africans can identify the pathological cause fueling the hate of Israel’s political-military elite and public in general, invoking extreme racism. Deliberately cultivated racial hatred inculcates a justification for the most atrocious and inhumane actions against defenceless civilians.

“The UN took a strong stand against apartheid, and over the years, an international consensus was built, which helped to bring an end to this iniquitous system. But we know too well that our freedom is incomplete without the freedom of the Palestinians.”

While Netanyahu and the settlers who wrote Trump’s annexation script appear triumphant, they need to understand South Africa’s lesson. Theft and repression fuels resistance. A people united in a just struggle with international solidarity, such as the boycott, divestment and sanctions (BDS) campaign, will have justice in the end.

Ronnie Kasrils was born in Johannesburg South Africa in 1938 of immigrant Jewish parentage. He became a film screen writer,but the 1960 Sharpeville massacre propelled him into the ANC led national liberation struggle that year. After the fall of Apartheid he served in government ministerial positions until 2008. He is prominent in Palestinian solidarity campaigns and author of several books.