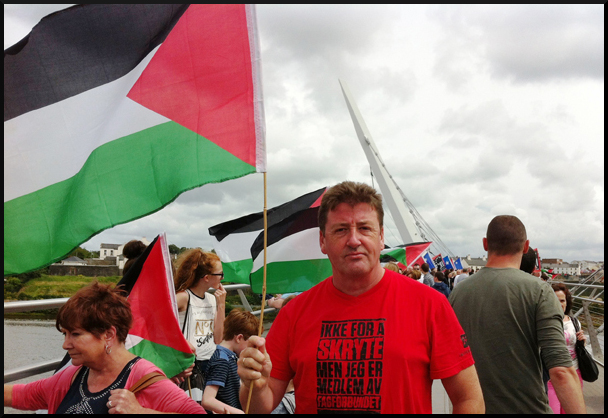 A BONE man is in the Hague this week as an international observer at a historic hearing on the Palestine-Israeli conflict.

Eddie Whyte, who has lived in Norway for over thirty years, is also a member of the Palestine Justice Campaign.

Eddie attended the International Criminal Court in the Netherlands as the case got underway yesterday (Tuesday).

The case has been brought by Dutch citizen Ismail Ziada against the former Chief of General Staff of the Israeli Defence Force (IDF), Benny Gantz, and former Commander of the IDF Air Force, Amir Eshel, over the bombing of the Ziada family home in Gaza.

The attack in July 2014 killed six family members from three generations of the Ziada family, including Ismail’s 75-year-old mother, three brothers, his sister-in-law, a 12-year-old nephew and a visiting friend. Mr Ziada, who is of Palestinian origin, contends that the attack on the family home was a violation of international humanitarian law and constituted a gross violation of internationally recognised human rights principles.

Mr Gantz and Mr Eshel claim immunity from the Dutch court and contend that Mr Ziada should have presented his claim in an Israeli court. Mr Gantz is running for office against Benjamin Netanyahu in the Israeli national elections this week.

“The case is historical in that it is the first time a Palestinian has been able to make use of civil litigation on the basis of universal jurisdiction to gain access to justice for war crimes.

“The pursuance of the case has been made possible by an online crowdfunder which received widespread support in Ireland from individuals, trade unions and human rights organisations and prominent people like Senator Frances Black, award-winning filmmaker Seán Murray and musician Mick Blake. Rock legend Roger Waters has been strongly involved in the campaign.”