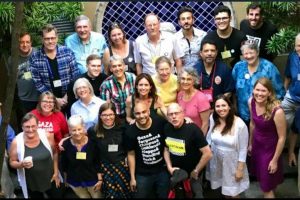 This week, the Executive Council of the Episcopal Church adopted a human rights investment screen related to Israel and Palestine and will sell its holdings in Motorola Solutions, Caterpillar, Inc., and the Israel Discount Bank.

This is the latest step in response to a July 2018 General Convention Resolution (B016) which committed the Episcopal Church to a similar process taken by the Evangelical Lutheran Church in America two years earlier. The action also follows steps previously taken by the Presbyterian Church (USA), the United Methodist Church and the United Church of Christ.

The human rights screen would bar Episcopal Church investments in “any corporation that supports or benefits from denial of human rights in or through the occupation of the West Bank, East Jerusalem or the Gaza Strip.”

The criteria for deciding if a corporation meets this threshold were reported in a media release from the Episcopal Peace Fellowship’s Palestine Israel Network:

“1) Does a corporation have a record of any of the following: supplying or doing business or providing goods or services in or to illegal settlements (as defined in international law) or contributing to the construction or maintenance of housing or other facilities in such settlements or seeking otherwise to profit from human rights violations in the OPT, or

2) Does a corporation have a record of directly or indirectly supplying or doing business with or providing goods or services to, or otherwise contributing to, the Israeli Defense Forces as the IDF operates in the OPT.”

Acting on a recommendation of the Executive Council’s Committee on Corporate Social Responsibility (CCSR), shares in three companies, Caterpillar, Inc., Motorola Solutions and the Israel Discount Bank, will be removed from the Church’s investment portfolio and placed on its No Buy List.

In a posting summarizing the Executive Council meetings, the Episcopal News Service noted that the Church has engaged with those companies for years without persuading them to respond as requested to human rights violations in the Palestinian territories. Bishop Doug Fisher, chair of the CCSR noted, “we do take seriously the rights of human beings to live free of human rights violations. We have engaged companies about the occupation since we first filed a shareholder resolution with Motorola in 1994.”

The actions adopted by the Council passed with very little debate or disagreement, in sharp contrast with the tension surrounding the resolution at last year’s General Convention or even at the Spring 2019 Executive Council meeting when objections were raised to some of the proposal’s language. One amendment, which asked the CCSR to investigate an upcoming stock offering by Saudi Arabia’s state-owned oil company for possible church engagement, was passed.

Reaction to the Executive Council’s action has been positive thus far. The Rev. Gay Clark Jennings, President of the House of Deputies, said, “I appreciate the hard work done for so many decades by so many to promote the Church’s commitment to justice for all the peoples of the Holy Land.”

In a statement, the Steering Committee of the Palestine Israel Network commended the entire Council for its work to address the Episcopal Church’s complicity, through its investment funds, in the Occupation.

“This action is timely as prospects for a two-state solution have diminished since the 2018 General Convention. [We have] noted with alarm recent actions taken by the U.S. and Israeli governments, including the Trump Administration’s actions to recognize Jerusalem as the undivided capital of Israel… Israel’s sovereignty over the contested Golan Heights, [and] the Nation-State bill passed by Israel,”

the statement reads in part.

While the total shares to be sold is small, about $1.2 million in Motorola, $125,000 in Caterpillar, Inc., and a smaller amount in the Israel Discount Bank, the symbolism is important. “This is a stewardship issue,” said the Rev. Canon C.K. Robertson, canon to the presiding bishop for ministry beyond The Episcopal Church. “The Church does not want to make profits from companies that contribute to the suffering of others.”

According to their media release, the Council also directed the Corporate Social Responsibility Committee,

Establishing a human rights investment screen for investments related to Israel and Palestine adds to the list of screens used by the Episcopal Church, including tobacco, fossil fuels and certain military contractors.

The 2018 General Convention also passed resolutions calling on its members to work to safeguard the rights of Palestinian children in detention, pursue justice in Gaza, reaffirm Jerusalem as the shared capital of Israel and a future Palestinian State, renew UNRWA aid to Palestinian refugees and support negotiations for a just peace.

Note: So many churches in the United States now see through the veil of propaganda surrounding Israeli abuses in what are generally called the ‘occupied territories’.  This is a strong advocacy for BDS, and in that light a positive step forward and coming from the heart of mainstream USA.   The  Episcopal Church in the US, following several other protestant churches, has taken a principled stand applying BDS incentives to reject investment in companies that support Israeli operations in what might be called the ‘peripheral’ domain of the Israeli settler state.

However,  it misses the fact that all of Palestine is occupied, including the part occupied by the Israeli settler state. Only when the death of the so-called 2 state solution has been embraced and the full dimension of the atrocities committed against the Palestinian people become known can the real work begin.   BDS is a useful educational tool, but until international ‘aid’ supporting the Israeli settler state is entirely withdrawn, BDS will be a partial effort and a test of process.