A Digital Tale of the Nakba 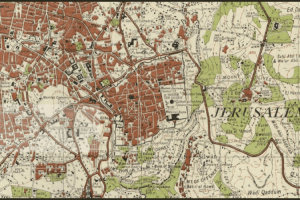 Most years Palestinians mark May 15 with demonstrations and memorials for the Nakba or catastrophe in Arabic. The day commemorates the destruction of Palestinian towns and villages during and around the 1948 Arab-Israeli war and the creation of the Palestinian refugee crisis. It generally falls within a week or so of when Israelis hold Yom Ha’atzmaut, marking their day of independence along the Hebrew calendar.

In a typical year, it would be common for Palestinian citizens of Israel to observe the Nakba by reading out the names of some 500 villages razed to the ground during the war. These somber events, with attendees dressed in black holding candles, have turned into violent confrontations in the past. In 2012 an event held by the Arab Student Unions at Tel Aviv University ended in clashes and every year since it’s been dicey for the students to host the memorial.

Last year, the Nakba Day event was canceled with campus officials citing “the Nakba Law,” a somewhat recent piece of legislation in Israel that promises to cut funding to institutions commemorating a “day of mourning” for the occasion of Israel’s independence.

This week the advocacy group Visualizing Palestine launched Today, Palestine, a digital storytelling platform with an interactive map designed by Palestine Open Maps, the first open-source and searchable and detailed map of the British Mandate of Palestine that includes more than 1,000 Palestinian and Jewish villages and cities.

“This wasn’t the first map where you could search on a digital platform, but it was the first where you could search all of the historical maps in detail in the same way you could navigate any digital map,” architect and UX designer Ahmad Barclay explained. He and team of designers from Visualizing Palestine and Columbia University’s Studio-X Amman first launched Palestine Open Maps in 2018. The plan was to make something as easy to use as Google Maps, but for the Palestinian landscape before 1948.

The Palestinian village of al-Zawiya prior to 1948, Palestine, Today. (Image: Visualizing Palestine)

Now two years later Today, Palestine comes as a sister project. “This new offshoot,” he said, takes both maps and population data, “and tries to make the bigger picture a bit more tangible in a more kind of emotive way. Looking through a kind of map database of location, but rather say each location has a story.”

“We also saw it as people being able to share these story, but they could add their own dimension to it,” Barclay said, referencing denizens who took to posting personal stories alongside links to specific towns on social media.

“We launched the platform on Tuesday and already we are seeing people saying my family is from this place, or I’ve been to this place, and adding their own story,” he said.

For many Palestinians, the Nakba remains a living trauma where the messaging around the event focuses more on ongoing impacts as opposed to the static events of history. Just today senior Palestinian official Hanan Ashrawi explained in a statement to media, “the Nakba is not a painful memory of a distant crime. It is a reality that has continued to evolve over the decades, resulting in a continuum of pain, suffering, economic strangulation, and injustice.” She then likened Israeli discussion of annexation over parts of the West Bank as an extension of “the Palestinian people’s reality of Nakba.”

My hometown Birzeit is the birthplace of the revolutionary poet Kamal Naser, who was assassinated by Israel in Beirut in 1973. They shot him dozens of times in the hand and mouth for being the PLO spokesperson. He is my great-uncle. #PalestineToday https://t.co/TCmRgLStzZ

“The other side of it,” Ahmad continued, “was really about thinking about this title, ‘PalestineToday.’

“It comes a little bit from looking at the territory as a single entity,” he said. “In terms of message, Palestine Open Maps was more of an open-source, open data map not really making a direct statement but, I guess other than in making a map of historic Palestine, which I guess is a political statement in nature.”

Now, Israel’s wall isolates “Bayt Hanina Al Balad” from the rest of the town and from Jerusalem. https://t.co/HFxgXN0tev via @visualizingpal

The creators note, on the site “Although the maps were already in the public domain, their usefulness was limited since they comprise hundreds of separate sheets with no easy means to search, navigate or otherwise comprehend.”

The project digitized “155 individual 1:20,000 scale map sheets produced under the British Mandate of Palestine,” which take up as much space as a quarter of an end zone on an NFL field, according to the website. “Laid out at their original size, the map sheets would measure 12m by 7m (38ft by 24ft).”