When a Whole Society Supports a Terrorist Organization 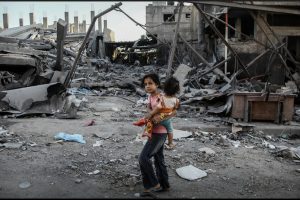 After the 2008-9 Israeli onslaught on Gaza that took 1500 lives, a UN fact-finding mission concluded that the three-week campaign was “a deliberately disproportionate attack, designed to punish, humiliate and terrorize a civilian population.” Note the word “terrorize.”

But was this an isolated incident? Not at all. Israel has a long and sordid history of state-terrorist activity. There was the pre-state terror, which eventually served as a means of ethnic cleansing, known as the Nakba of 1948. Those Palestinians who tried to return were shot by the thousands, most of them unarmed.

In the early 1950’s, David Ben-Gurion ordered a massive state-terrorist operation in response to the murder of a Jewish family by Palestinian guerillas. Although the suspects were not found, a “retaliatory” attack was conducted across the Jordanian border in Qibya, commanded by Ariel Sharon. Dozens of houses were blown up with their residents inside, about 70 killed. Ben-Gurion cynically tried to attribute the attack to “Jews from the Arab countries or survivors of the Nazi concentration camps”, apparently the lowest stratum he could think of for his cowardly blaming – above Palestinians, that is.

It goes on and on. In 2017 I had a debate with a self-proclaimed ”burning Zionist” for a radio podcast, where I pointed out that the former Prime Israeli Minister Menachem Begin was a terrorist. My counterpart argued that since Begin concluded a peace agreement with Egypt (1979), he must be considered a dove in our times. I regret not having yet had the chance to read about Israel’s false-flag terror campaign in Lebanon under Begin’s premiership. The revelations about this roughly-four-year campaign in the years 1979-83, a campaign which took the lives of hundreds of Palestinian and Lebanese civilians, came out last year in Ronen Bergman’s book “Rise and Kill First.” These things are often censored, and years pass until you hear about them. And I’m not even getting into the whole 1st Lebanon war in 1982 which killed almost 20,000 people, roughly half of whom were civilians, all in order to avert a Palestinian ‘peace offensive’. The false-flag terror campaign served as part of the pretext for that war.

And just as I write these words, there has been another “targeted assassination” by Israeli forces in Gaza, of Baha Abu al-Ata, of Islamic Jihad.

But there is also the daily terrorization – like last month’s kidnapping and terrorization of 10-year old Qusay al-Jaar by Israeli soldiers, meant to extract information from him about other masked youths he did not know.

Terrorization has been a consistent means of the Israeli state and army vis-à-vis Palestinians. As Moshe Dayan said in 1955:

The only method that proved effective, not justified or moral but effective, when Arabs plant mines on our side [is retaliation]. If we try to search for the [particular] Arab [who planted mines], it has not value. But if we harass the nearby village…then the population there comes out against the [infiltrators]…the method of collective punishment so far has proved effective.

This policy is a violation of international law. But Israelis generally accept it as a ‘necessary evil’ – notice Dayan’s “not justified or moral but effective”. This is why Gaza is being terrorized, this time, ostensibly, for electing Hamas. The unarmed protesters who are being shot and killed by the hundreds are but an extension of the siege policy. The recent siege, which came in the wake of Hamas’s election victory in 2006, is also but an extension of a longer historical siege. Palestinians are simply under a continuing colonialist siege, designed to reduce their territory and their presence.

So when anti-Apartheid BDS activist Adi Shosberger stands near the Gaza perimeter and calls Israeli soldiers out for being terrorists, Israelis start threatening her family.

Israelis generally accept this terror, but they won’t have it called out as such. These things that the Israeli army does are just things that have to be done, as it were, by the most moral army in the world. And it’s all about security, it’s about protecting your country. How dare you criticize!

My uncle died in the 1973 October war, in the sands of the Egyptian Sinai desert. He was actually in the jeep with Ehud Barak, in the elite Matkal commando unit. They were trying to rebuff the Egyptian surprise attack, which came after Israeli refusal to respond to Egyptian President Sadat’s peace overtures of land for peace. They were trying to defend Israel’s 1967 occupation. Dayan said that he preferred “Sharm al Sheikh without peace” to “Peace without Sharm al Sheikh” (referring to the Sinai coastal town). So my uncle died in defense of the Israeli occupation of Egypt, which was eventually abandoned through the peace agreement. But you can’t mention him as an occupation soldier. No, in the collective memory he needs to be remembered as a hero who defended our country.

But occupation is simply what Israel does, it’s always been doing it. This is part of its settler-colonialist expansionist nature. And because there are people involved, not just deserts and sand, then terrorization of the population is an inherent part of the army’s activity. Therefore, the Israeli army is essentially an occupation army, and terror is part of its very nature.

Israeli peace and BDS activist Yonatan Shapira, who used to be a helicopter pilot, says it clearly: “I was part of a terrorist organization.”

In July 2002, Salah Shehadeh, head of the armed branch of Hamas in Gaza, was bombed in the middle of the night with an F-16 dropping a one-ton bomb on his house where he was sleeping with his children and his wife. The bomb killed fifteen people, most of them children, and about 150 were injured. If I needed some answer for my questions and doubts, that was clear: this is a terror attack. And I’m part of a terror organization.

Shapira wrote a letter in 2003 together with 26 other Israeli air force pilots, refusing to fly over occupied territories. He has told how, when the letter made headlines, his father, a former pilot, passed by a military colleague, a General, by a newsstand and the General remarked that these refusers should be executed.

There is a huge reverence of the military amongst Israelis. Jewish Israelis are by far most trusting of the military (82%), more than they trust local municipalities (61%), the parliament (38%) or political parties (22%). Thus, the military is a kind of societal cult in Israel. This also goes to explain the overwhelming impunity of Israeli soldiers, who commit war crimes daily with little or no consequence.

This also explains why, to speak as I do about the Israeli military, is generally considered a kind of heresy.

I’m nearing my 50’s. It is now the time where the next generation, my children and the children of my siblings (who live in Israel), are at the age where they join the army. And it’s like a moral ritual – of course you join the army, what else?

The late Professor Yeshayahu Leibowitz has called the military refusers “heroes”. But these conscientious objectors are treated as criminals in Israel, and are generally subject to societal shaming.

I live in Denmark, and I consider it one of my great successes that I have raised children who have not joined the Israeli army. Living away from Israel is one aspect in distancing yourself from this militarism. But there are many Jewish Zionist youths who volunteer from abroad to join the Israeli army. They perhaps feel that they are fulfilling a heroic duty. I can understand it, I used to be a victim of that Zionist brainwashing and I had those feelings in that age. I haven’t told my children “Don’t do it”, because I feel a responsibility to not invade my children’s privacy in that way (plus, you know how teens can end up doing the opposite…). But I think I did manage to distance them from this militaristic pull. I can’t say whether this would eventually have saved a Palestinian from being bombed, kidnapped or tortured, but I like to think that it saved something in the life of my own offspring. If we were living in Israel, if they were growing up there, the societal pull would likely take them to the military. And even if they would be doing a desk-job, they would be part of this terrorist organization which calls itself the Israeli Defense Forces.

This organization, the IDF, has become very strong in presenting itself as moral and liberal, through its Twitter account, which regularly runs Hasbara about being the most Vegan and LGBT friendly army in the world. It boasts of women-soldiers donating their hair to cancer patients, as cancer patients die in Gaza due to the siege.

The Israeli military is a huge ideological shield for Zionism. The fealty that is offered to it by most of the Israeli society provides a useful ideological firewall against effective challenging of Israeli oppression of Palestinians, and it makes people feel that they need to mute their critique of Israeli war crimes, since we are supposedly all part of this army, in one way or another, directly or by extension. It’s all about security, as it were.

This also explains why a military record of any kind is like a minimal prerequisite in many lines of work in Israel. Not having been there is suspect. If you haven’t paid tribute to the Zionist terror organization, something must be wrong with you.

Israeli musician, conductor and blogger / writer based in Denmark.